Last April, the INAO (French National Institute of Origin and Quality) approved the introduction of six new grape varieties for climatic and environmental adaptation in the Bordeaux and Bordeaux Supérieur PDO specifications. From now on, they may be planted by winegrowers on an experimental basis. What are the consequences for Bordeaux?

The average temperature in the Gironde department has increased by 1.5°C in the past thirty years. The impact is already visible in the vineyards, with shorter growth cycles, overripe grapes, earlier harvests and higher alcohol contents. “I began making wine twenty years ago,” Xavier Grassies, cellarmaster at Château Morillon (Campugnan/Blaye), said. “Back then, we produced wines at 12.5% abv and sometimes we even had to chaptalize the juice to increase the alcohol content. In the last ten years or so, everything has changed: nowadays, it is rare to produce a wine below 14.5% abv.”

Being an early-ripening grape variety, Merlot (representing 66% of the Bordeaux red area under vine) is impacted the most by the rise in temperatures. Will Bordeaux continue to produce well-balanced, high-quality wines in an increasingly warmer climate? How can winegrowers adapt?

“Over the past thirty years, winegrowers and enologists have fought against the climate to facilitate the ripening of the grapes”, Alexandre Pons, enology research scientist (ISVV-University of Bordeaux-OENEO Group), said. “We are currently witnessing a paradigm shift: we now have to contend with excess temperatures and low rainfall. We have to rethink our entire operations both in the vineyard and cellar. In other words, we must change everything in order to keep everything the same…” 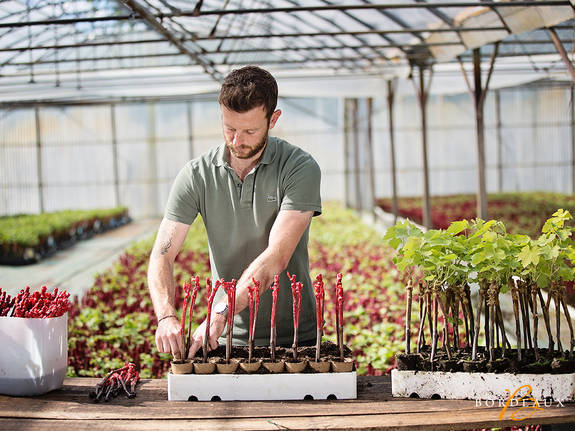 The Vitadapt plot is a test plot owned by the National Institute for Agricultural Research (INRA) in Villenave d’Ornon, planted with 52 French and foreign grape varieties (Vitis Vinifera) in 2009, with the support of the CIVB. Researchers are studying the behavior and adaptability of these grapes in the context of the environment and climate change to evaluate their physiological response to drought.

Six grape varieties were chosen from this plot (four reds and two whites, see box opposite), to be introduced on an experimental basis* by the Bordeaux and Bordeaux Supérieur PDOs. “Grape varieties that were too distinctive or far removed from the Bordeaux archetypes were not included: no Alsatian or Mediterranean grapes, for example. Likewise, iconic grape varieties from other regions such as Syrah, emblematic of the Côtes du Rhône region, were also excluded,” Laurent Charlier, Head of Research, Innovation and Technology Transfer at the CIVB, said.

Planting is already under way

Several winegrowers have begun experimenting with these grape varieties for climatic and environmental adaptation. The Château Roquefort team in Lugassan decided not to replant Merlot vines on part of its limestone plateau, and trial Castets and Arinarnoa instead. “We shall plant 4,000 vines of each, i.e. 0.8 hectares, to conduct real-time experiments in our terroir,” Camille Giai said. “In the long term, we will study how these grape varieties can enhance our blends and help us expand our product range, while trialing possible solutions to combat climate change.”

The same applies to another grape variety at Château Morillon: “We need to diversify our grapes with less emphasis on Merlot,” Xavier Grassies said. “In late April, we planted 60 ares of Marselan, a grape variety that we chose for its roundness, volume and richness on the palate, yet without the high alcohol content.”

What about the taste of future Bordeaux wines?

What influence will these new grape varieties have on future blends and the taste of Bordeaux wines? It is still a bit early to tell, even if Xavier Grassies already knows the style of wine he will produce from his several ares of Marselan, which is none other than a cross between Cabernet Sauvignon (a traditional Bordeaux grape variety) and Grenache. “My first harvest will take place in 2023. I will ferment and age the Marselan separately, not in oak vessels, but probably in amphorae, to preserve the identity of the wines as much as possible and retain their freshness.”

In the vineyards, several questions still remain unanswered. We will need at least ten years to observe how these new grape varieties will behave in the Bordeaux terroir, to better understand their organoleptic profile and role in blending. “However within the next ten years, consumer tastes will have also changed!,” Laurent Charlier highlights.

Meanwhile, researcher Alexandre Pons wants to put the role of these new grape varieties in future Bordeaux wines into perspective. “They are far from being the only method to adapt to climate change. We are already adapting our viticultural practices and plant material, such as rootstocks. We may also look at the history of Bordeaux wines: Carménère, Malbec and Petit Verdot are historic grape varieties that have been somewhat overlooked. It has never been about radically changing all Bordeaux grapes, nor abandoning the distinctive characteristics of our wines!”

*These grape varieties are authorized to represent up to 5% of the area under vine, and up to 10% of the final blend of a given wine, and must not be mentioned on the bottle label.

Fermentation under the microscope

To mark the launch of the new “Wine and Pizza” workshop developed by the Bordeaux Wine School, we will take you on…
Read the article
Actualites

Sustainability: Communicating the Ethical Wine Movement to your Customers Over the past decade sustainability has gone from being a fringe issue to…
Read the article

With restrictions temporarily eased, September saw independent retailers and restaurants operate as close to normal as they have been permitted this year,…
Read the article

You are not a member?